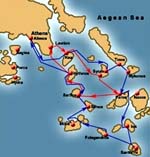 The island group in the central and southern Aegean. An imaginary circle centered on Delos, washed by sunshine and breathing the sea breeze.
One of the most important Mediterranean civilization, the Cycladic, was born here.
It is probable that the lost continent Atlantis was around here.
Crystal-clear water, bright sky, sun and an austere architecture on naked rock, the Cyclades are filled with light and sunshine.

Kea (Tzia) is very close to Athens and offers relaxing vacations and pristine beaches, tile roofs, stone- paved alleyways, chapels and windmills.
On small Kythnos, the shores are heavily indented and the island has radioactive springs with great curative powers.

Serifos is naked waves of mountains and small fertile valleys, narrow stone-paved streets, magical shores and the castle surrounded by windmills. Grey trails line the rocks of Sifnos and white chapels lie between them. Here green alternates with dazzling white.

Milos was born of a volcano and hides many secrets above and below its surface. One of its secrets, the Venus of Milo, rests in the Louvre.

Tinos, the holy island of the Virgin Mary. Numerous beaches can be seen from the peaks of the unending mountain range that crosses it lengthwise.

Mykonos is the cosmopolitan center of the Cyclades. Its low rocky hills slope down to enchanting golden beaches. Trends that will sweep the international scene are born in the intence nightlife of this modern resort

The ancient holly island of Delos, birthplace of Apollo and Artemis, is a vast archaeological site. For many centuries it was the religious center of Greece.

Siros, on the other hand, is the modern administrative, commercial and cultural center of the Cyclades. Beautiful locations and scenic beaches sum up the island.

On Paros, white-washed stone benches beneath the jasmine announce, and at the same time invite the visitor to participate in summer celebrations, such as the wine and fish festivals, as well as the Paros intense night-life. Just opposite Paros, lie the golden sands and and natural beauty of another small island, Antiparos.

Ios (or Nios as the local call it) is decorated with small scenic bays, countless chapels, vineyards, and olive trees, all set under the bright Cycladic sky.

Its geological particularities, its past and its imposing scenery, single out Santorini (Thira) in the Aegean next to the rest of the Cyclades. Bright white domed houses cling to the cliff sides of the caldera formed by the volcano's explosion in 1500 B.C. A whole civilization is coming to light at the archaeological sites at Akrotiri, the prehistoric city.

Folegandros is a small rocky island with special wild beauty of alternating cliffs and sandy beaches. The church of Panagia and the golden cave with stalactites and stalagmites are worth to visit.